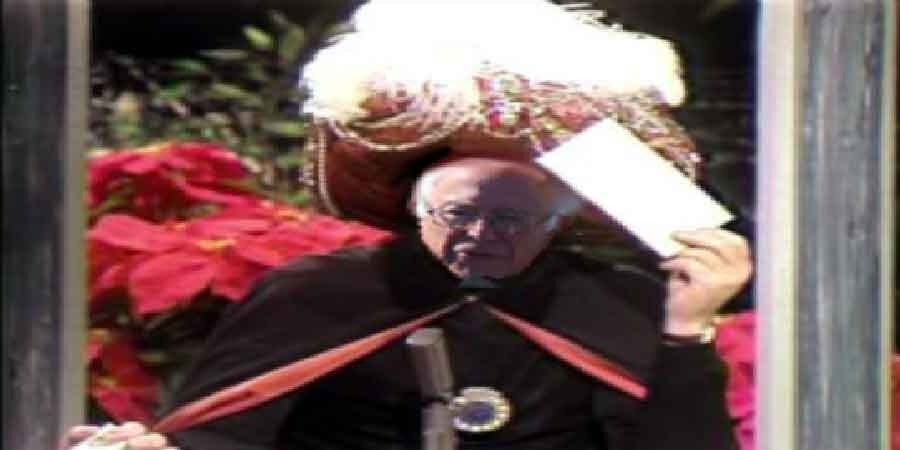 In what can only be called a stunning television moment, the epic revival of Johnny Carson’s beloved character, Carnac the Magnificent, returned to the Tonight Show on October, 23, 2020.

None other than Bernie Sanders—Bernac the Magnificent (?)—portrayed the reincarnate Carnac.

With less than 2 weeks to go before the 2020 Presidential Election on November 3, 2021, Bernie Sanders made a guest appearance to discuss the upcoming election.

Looking Back At The Original Carnac The Magnificent

As a reminder of the popular Tonight Show sketch, Carnac the Magnificent, originally played by Johnny Carson, would draw a sealed envelope from a jar and hold it to his forehead. He would then answer the question sealed inside the envelope. To demonstrate the accuracy of his magnificent predictive skills, Carnac would rip open the envelope and read the question aloud to the audience.

Here are a few questions Carnac predicted over the years:

Question: What does an alligator get on welfare?

Question: What can be heard in the men’s room at the Kremlin?

Question: Name a clock, a jock and a crock.

Imagine the surprise when Tonight Show fans saw Bernie Sanders doing a spinoff of the Carnac sketch in this previously unannounced television event.

Bernac employed a slightly different format than Mr. Carson. Besides the absence of envelopes, viewers had to wait for the very specific time period of 10 p.m. on November 3rd until the morning of November 4th to determine if Bernac’s predictive powers were as uncanny and magnificent as the original Carnac.

Of course, the mere fact that Bernac told viewers the exact timeframe in which to test his crystal ball accuracy is beyond unbelievable! Way to go Bernac!

Fallon started off a general conversation about the 2020 election. Then the host asked Bernac when we should expect to know the winner.

And… Bernac did not disappoint. It happened just as he predicted on October 23, 2020. <gasp!> The details and accuracy! It’s almost as if he knew a plan or something?

Even Carnac lacked this level of predictive capability.

Did Bernie Overdeliver Or What?

Yes. Bernie overdelivered on the answer to Fallon’s question. You know, sort of like a criminal gives an overly detailed alibi of what he/she was doing before he/she found the dead body?

But, why in the world would Bernie basically out the globalist/leftist/democrat plan to steal the election?

Bernie had been the clear leader in both the 2016 and 2020 democrat Presidential primaries. He had a base. People were excited about Bernie.

Hillary and Joe—not so much.

You see, though Bernie runs with the democrat crowd, he is not considered worthy of leadership positions such as president or cabinet member. Neither is he considered a “winnable” candidate by the dubious likes of James Carville (who thinks Hillary is wonderful?).

In the run-up to the 2020 primaries, many democrat pundefecators were openly critical, even hostile, toward Bernie, even though he won the first three primaries. Carville said, “Bernie’s tu awt da-uh, too coomie…his hanz gwonna evah whichah way…”.

It is true. Bernie has never tried to hide his true democrat colors of socialism/communism.

A fool takes no pleasure in understanding, but only in expressing his opinion (Proverbs 18:2).

According to multiple Wikileaks emails released in 2016, the DNC colluded to steal the nomination from Bernie and award it to Hillary. As a consolation prize, Bernie received a $600,000 lake home, so don’t feel too sorry for him.

In 2020, “the power that be” decided joe biden should be the nominee. However, biden did not even place in the top 4 in the first 3 democrat primaries. However, Bernie was #1 in all. By the time of the South Carolina primary, the biden plan was in motion. Coincidentally (?), the remaining candidates all dropped out within two days, except for Bernie and Pocahontas.

Biden somehow managed to bag 50% of the South Carolina vote, though he had not even placed in a primary up to that point. No one is sure what gave biden such Dominion in this somewhat conservative state. Bernie came in second—but at 18%? Such impossible numbers!

Back to Bernie – A Future He Could Never Believe In

A life-time opportunity taken away from Bernie, not once, but twice!

Remember Bernie at the inauguration? The word “sulk” comes to mind.

According to 7 Reasons Why People Use Passive Aggressive Behavior, “…passive aggressive behaviors such as sulking, emotional withdrawal, and indirect communication are much more the mark of immature, untamed emotional expression.” Sort of like people who refuse to admit that socialism and communism are dysfunctional forms of government.

Everyone is aware that Bernie is a staunch communist. Communism, however, empowers .01% of the people while the other 99.99% are disenfranchised and in poverty. It seems Bernie thought he was part of the .01%? (No Bernie, the democrats only wanted your voters.)

Bernac’s telegraphing of the election steal plan reveals his passive aggressive tendency. Inwardly, he plays the victim—a true affiliate of the democrats. He wanted democrats to be upset over his “uncanny prediction” because, for once, it put him in control of them. In other words, he felt powerful. And the low-rated Tonight Show with a 99.9% democrat audience, allowed him to vent without doing any real damage.

Whether communism, socialism, nazism, or any of the other bastard children of Marxist ideology, the government system that objectifies people and their “production” does not work. Think about it—the socioeconomic system that Bernie has worshipped his entire life let him down.

The discerning sets his face toward wisdom, but the eyes of a fool are on the ends of the earth (Proverbs 17:24).

Though Senator Sanders remains among the elitists in DC, internally he must be a train wreck.

Whoever trusts in his own mind is a fool, but he who walks in wisdom will be delivered (Proverbs 28:26).

Even though they screwed him over, not once, but twice (!), he is still helping his betrayers destroy the country.

Like a dog that returns to his vomit is a fool who repeats his folly (Proverbs 20:11).