“Rootin’ For Putin!” May Become a Bumper Sticker Since He Clearly Bested Bumbling Biden

Guide Host Ken Matthews is a respected radio pro, not a bumper sticker writer, but he said he is tempted to start cranking them out with the slogan “Rootin’ For Putin!” after he saw how the Russian president clearly bested bumbling Biden in Geneva on Wednesday.

Ken said he forced himself after a few seconds to stop loudly cheering for Putin, even though it was obviously no contest.

Even if he were to put the American president’s signature blunders aside, Ken was “amazed” by “how good Putin was” at every turn as the world watched.

“Wow, this guy is a surgeon with words!” he exclaimed. “It’s amazing. He’s better than Obama!”

When Ken said “real journalist” Peter Doocy of Fox News asked Biden if he would think about calling his “old friend” Chinese President Xi Jinping to see if he would reveal the real story about the origins of the Wuhan Virus, Biden, seemingly cranky at the insinuation, said, “Certain things don’t have to be explained to the world, you can just see the results… It’s not about trust.” Then, repetitively exclaiming he looks at results, Biden made a beyond lackluster comparison to the outdated saying “the proof of the pudding is in the eating.”

Unfortunately, his most insightful comment of the day was when he noted that odd choice of words was a very old reference.

In contrast, Ken noted that Putin was continually diplomatic and a flawless communicator, even under pressure, like when he directly answered with details a journalist’s two-pronged question to evaluate the overall tone of the meetings and what the pair had negotiated regarding cybersecurity. “They had to go to Putin because they couldn’t get much information out of Biden,” Ken said in exasperation.

Interestingly, unlike the U.S. Drive-Bys covering the event, who more than once caused Biden to publicly explode, Putin graciously said there was “no hostility” in the leaders’ meeting and it was “fundamental and constructive.” 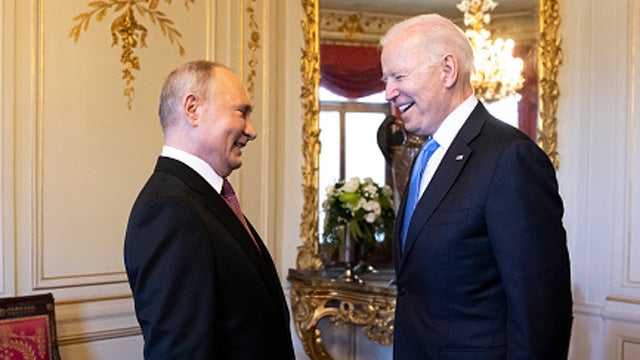 What’s also finally coming to the forefront, as Biden trips at every turn, is just how constructive President Trump’s counterpart summit with the well-matched Putin was – and how super Trump’s strength was. Unlike powder puff Biden, Ken remembered with admiration that “these guys were like two caged alpha animals.”

Trump weighed in to the world audience during an interview about yesterday’s disappointing showing by the man who received the most U.S. presidential votes in history. “It was another day,” Trump said. “It was a good day for Russia. I don’t know what we got out of it!”

What some of the few (just six) reporters allowed to ask questions of Biden got out of it were well-deserved apologies later – as Biden wasted more precious time rather than delivering MIA urgent answers. Ken noted that Biden said he was sorry to CNN’s Kaitlan Collins after an embarrassing dust-up when he attacked her credibility for legitimately shouting to him about Putin, “Why are you so confident he’ll change his behavior, Mr. President?”

Tellingly, though, Biden’s outburst included one of the most spot-on answers of the day that Ken noted to be an unfortunate thread throughout to describe Biden’s continually weak showings: “When did I say I was confident?!” End of Transcript,

Rush Comments Off on “Rootin’ For Putin!” May Become a Bumper Sticker Since He Clearly Bested Bumbling Biden Print this News
The Next Chapter in EIB History Previous News
Next News Build the Wall! Free State of Texas Does the Job Biden Won’t Do