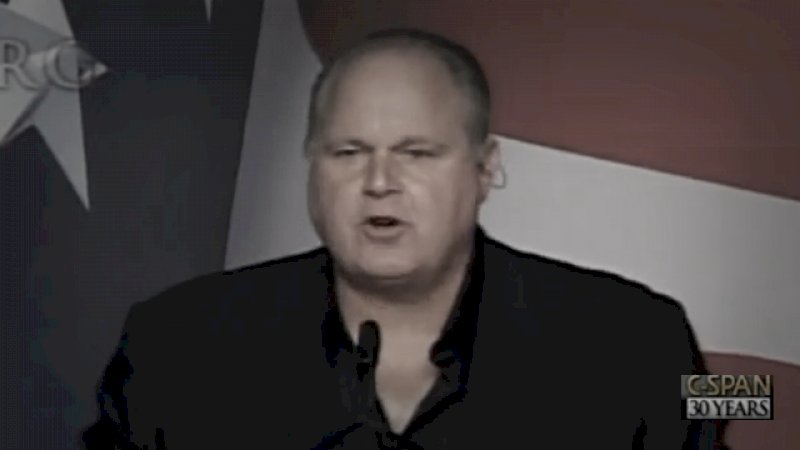 TODD: We played this clip twice of Ron DeSantis briefly honoring Rush at CPAC, a beautiful statement from Governor DeSantis, who’s done an incredible job as governor. So, here’s the Maha himself, remembering this decades-ago CPAC speech where he talked about going beyond policies to persuade and speaking about our principles.

RUSH: This is my CPAC speech, February 28, 2009. I mentioned this yesterday, and I want to revive it today. I told the crowd, the assumed throng, that we’re gonna hamstring ourselves if all we do is stay focused on policy. 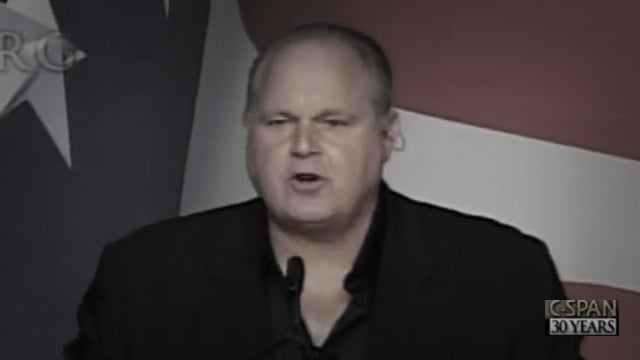 RUSH AT CPAC: From the standpoint of what we have to do, folks, this is not about taking a policy or a process that the Democrats have put forward and fighting over it around the edges. If we’re gonna convince the minds and hearts of the American people that what’s about to happen to them is as disastrous as anything in their lives in peacetime, we’re gonna have to discuss philosophy with them. We are going to have to talk about principle! Because our principles are not present in what’s happening here. So where the hell do we go to compromise what we believe in when our principles are not theirs; our principles are just the opposite of what is happening?

RUSH: I was in a longer rant here about this whole notion that everything focuses on policy. And remember, now, at this point in time we’d just got shellacked and I’m the only guy not willing to cave and give in and try to get along and mitigate the damage. I’m out there saying, “I hope he fails,” and everybody’s having a cow over that. And I’m saying, “Why do we accept their policy premise and then negotiate around the edges? Why do we accept that there must be a health care bill?” “Okay, they say we need a health care bill? Fine. We disagree with yours; we’ll do our own.”

Why? Did we come up with the idea of a health care bill on our own or are we reacting? Same thing with all the other policies. So if we get caught up in policy, they’re gonna win all the time because they’re the ones that have this never-ending policy agenda — and we’re always gonna be on the defensive. And where do our principles and where does our philosophy tie in when all we’re doing is discussing policy after policy after policy.

When I first got a chance to meet them, I’m sitting at home not having yet met them, and wondering about them, and I got a chance to talk to ’em, I asked them — ’cause I had my own impressions of them as being crucially important to the formulation of opinion in the country; having a great, great impact on policy events and so forth; and I remember, I asked them — about it. I asked George Will first, “Do you ever sit at home late at night when the family’s gone it to bed and you ever take stock and feel proud about what you’ve done and the influence you’ve had?”

And Will just pooh-poohed that, made it sound like it was sort of a silly question and said, “I don’t think of myself like that at all! I’m thinking about what I have to do tomorrow,” and Buckley didn’t say that exact thing, but it was somewhat similar. You gotta be honest about who you are. I don’t care who you are and what you do for a living, whatever, you’ve got to be honest with yourself about who you are.

Who was it? Clint Eastwood! After he just shot somebody in one of spaghetti westerns, he said, “A man’s gotta know his limitations.” You can’t… If you’re gonna sit around and lie to yourself about how big you are and how important you are, you are headed for the biggest wake-up call that could crush you psychologically that you could ever face. That’s why I have to…. Sometimes I kinda laugh at these people like… (sigh) You can tell.

I don’t care who it is, you can tell when somebody’s really full of themselves and really thinks that they’re “the cat’s meow,” as my mom used to say. Then you realize their audience might be 500,000 people, and in the big scheme of things, nobody has ever heard of them, much less cares. But they’re sitting there telling themselves how big and important they are. They’re just living a lie. I’ve always tried… (interruption) It was Magnum Force! That was the Dirty Harry series. It was not the spaghetti westerns. It was Magnum Force. Yeah, Eastwood as Dirty Harry.

TODD: When Rush said — you heard it, too. Where he said about the Republicans, nibbling around the edges of policy, debating around the edges of what they want to do, I lived it. This is one of the most astonishing days, and I thought immediately… At the time I had no real conviction to EIB. I thought, “Oh, I wish so much I could have Rush in this room!”

This was in D.C., and the Obamacare thing had been announced, and in a moment of lucidity (back when Michael Steele was a conservative), he wanted to fight against Obamacare because Michael Steele said, “This is socialism; it’s a precursor to communism. This is gonna destroy the country. We’re going to go on a political campaign against it.

“We’re going to use the mechanisms of the RNC, the voter database, the get-out-the-vote mechanisms to fight against this tooth and nail.” As a matter of fact, what happened was I was in a meeting, the leadership meeting with the RNC. I believe the chairman was there. In fact, I know Michael was there. We got word from one of the staff.

One of the staff said, “John Boehner and Mitch McConnell themselves have told us to stand down on this.” They didn’t want it fought. They wanted to work within it. To work within a framework of the government taking over more health care, which is originally what made it to be so expensive.

What he spoke there at CPAC — that dynamic, Rush Limbaugh explained extemporaneously speaking — happened 60 days later. That’s how on top of it the Maha was, and I’m sad to say, that dynamic has returned. (laughing) We see McConnell once again, “Well, yeah, we’ll participate in the Democrats’ agenda, but we’ll change a few minor things.”

TODD: Listen to Rush close out his CPAC speech from a decade ago with just such a message.

RUSH: So as you leave here…

RUSH: As you leave here: Optimism, confidence, not guilt. It’s not worth it. There’s nothing to be guilty about. Don’t treat people as children. Respect their intelligence. Realize that there’s a way to persuade people. Sometimes the worst way is to get in their face and point a finger. Set up a set of circumstances where the conclusion is obvious. 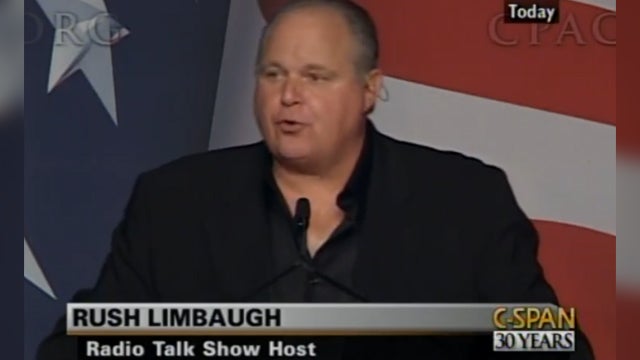 RUSH: Let them think they came up with the idea themselves. They’ll think they’re smart that they figured it out. Who cares how you persuade them? The fact they can be persuaded is factually correct, it’s possible. But the main thing to do here is stop thinking that we are a minority. Stop thinking —

TODD: On that topic — optimism and principles — let’s talk to John in Duanesburg, New York. John, you’re on the Rush Limbaugh program within Todd Herman filling in. We got about 90 seconds, John. Welcome to the program.

CALLER: Thank you so much. I can do it in 90 seconds. Mega heavenly dittos and thanks for taking my call. I was listening to some of these calls. They’re so hard to follow, but I’ll do my best. I remember, you know, Rush obviously last year announced that he had cancer, and that was a huge comeback, one of the earlier calls this morning.

But I have listened long enough to remember when he lost his hearing — I don’t know when it was, the late nineties — and then on top of that there was an oxycodone-type addiction. I don’t remember all the details. But tell me that those are not huge life comebacks. I mean, a guy on the radio losing his hearing? There would be like me, working with my hands, losing a couple of fingers, you know? 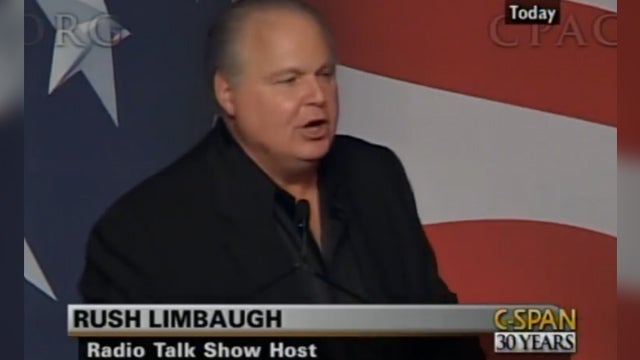 CALLER: Just amazing. Not only the cancer, but the hearing loss. That’s always amazed me in how he was able to come back from that with all the gadgets and gizmos and technology that he used.

CALLER: And the heart. I mean, God.

TODD: I mean, John you’re telling me one of my favorite Rush moments when he came back and was having to read the words of callers, not hear them, and he couldn’t hear his beloved music before he got the cochlear ear implant. Rush came back and gave us a lesson that I will never, never ever forget, that with freedom comes responsibility, and Rush spoke about the responsibility for the choices he made, and it changed countless lives. I’ve heard people call and say, “You are the reason I got sober.” Great, great call, John. Thanks for that. End of Transcript,

Rush Canceled Cancel Culture on “I Hope He Fails”

TODD: One of my very favorite lessons from Professor Limbaugh was Rush defeated cancel culture from the actual White House, an attempt to cancel him from the White House before that was even a phrase. And it happened after Rush gave the Wall Street Journal four words about Obama’s first term. Let’s hear this, and…