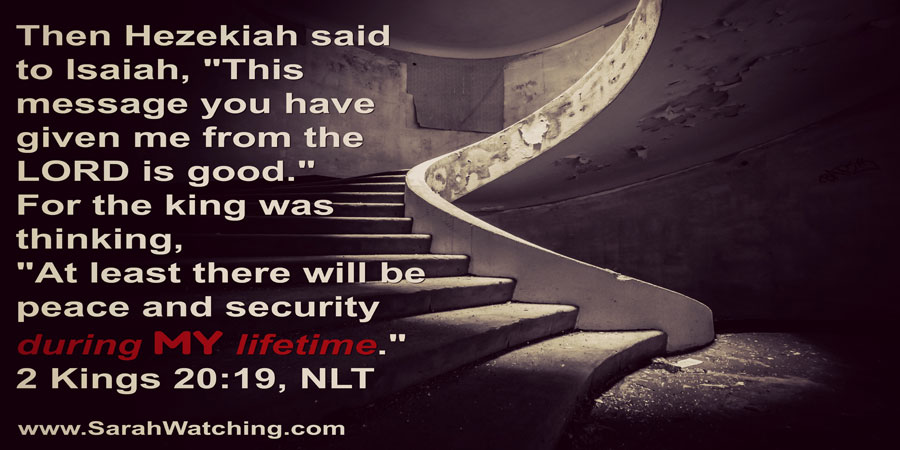 Though Hezekiah lived off the peace and prosperity of those before him,

and enjoyed the mercy of God for the last 15 years of his life,

Hezekiah only seems to have the attitude of a far-left Democrat (excuse the redundancy). At the beginning of Hezekiah’s kingship, 2 Kings 18:3 says that “he did what was right in the eyes of the LORD, according to all that David his father had done.” Moreover, verse 4 says that “[h]e removed the high places…” Up until this time, the Kings of Judah were remiss to eradicate idolatry from the land. Consequently, their bios earned the descriptive refrain denoting leadership failure “…but they did not remove the high places…”.

Hezekiah didn’t exactly live off the peace and prosperity of those before him either. Throughout Hezekiah’s kingship, Judah lived in subjection to the nation of Assyria. Hezekiah walked the fine line between healing the deep rift which held Judah apart from what remained of its sister kingdom of Israel, and at the same time to avoid any overt act of disloyalty to Assyria.

So, what was going on with Hezekiah in 2 Kings 20:19? Hezekiah had received a divine rebuke for acting pridefully, also known in Bible-speak as “foolish.” The prophet Isaiah gave Hezekiah this ominous word from the Lord. And the king accepted the word “as good.” In doing this King Hezekiah submits to the Word of God and accepts the judgment.

Interpreting the last part of this passage requires the interpreter to remember that the Bible is God’s self-revelation to mankind. The last part of 2 Kings 20:19 is not meant to imply that Hezekiah is unconcerned for those who will come after him. Instead, he is acknowledging that he will receive way better than he deserves from his merciful God. Peace and security represent God’s favor and living in peace is a blessing from God. Not to mention the blessing (yes, blessing) of dying and therefore avoiding any coming judgments.

Even Jesus makes this point when he speaks of the final judgment:

For there will be greater anguish than at any time since the world began. And it will never be so great again. In fact, unless that time of calamity is shortened, not a single person will survive. But it will be shortened for the sake of God’s chosen ones. Matthew 24:21-22, NLT

Even though Hezekiah had received an ominous word from the Lord, he could still call God’s word “good.” The fact is often overlooked that Isaiah prophesied this word of judgment to the King. The Bible is not placing the blame on Hezekiah for the coming judgment, but God does make him aware of what is to come.

God shows Hezekiah the ultimate worthlessness of these treasures that he exhibited with such loftiness. “Flexing” for the sake of the the people who will one day take the treasures and even Hezekiah’s own descendants to Babylon, is shown as negligence in attending to what belongs to God.

Then Isaiah said to Hezekiah, “Hear the word of the LORD:  17 Behold, the days are coming, when all that is in your house, and that which your fathers have stored up till this day, shall be carried to Babylon. Nothing shall be left, says the LORD.  18 And some of your own sons, who shall be born to you, shall be taken away, and they shall be eunuchs in the palace of the king of Babylon.” 2 Kings 20:16-18, ESV

For Hezekiah, or most anyone else, the coming judgment along with his own recklessness, must have caused anguish. Much grief accompanies foreseeing evil. In fact, if we knew beforehand what would happen to us on a day to day basis how could anyone live?

Hezekiah has nothing in common with far-left liberals. When read outside of the character of Hezekiah, and the context of 2 Kings 20, “at least there will be peace and security in my lifetime” sounds very much like Democrats, Socialists, Communists, etc. This ultra-left party could care less about destroying the United States, that is, about things that will not happen in their lifetime.

Many Democrat politicians have children and grandchildren. Its puzzling, to say the least, why they don’t care about their families. Leftists go to Washington D.C. barely making $100,000, or perhaps they have several hundred thousands in assets, but they come out millionaires! Perhaps they feel this money will last, or the children and grandchildren will be protected long after they are gone?

But if the U.S. economy bottoms out—and it will under Democrat totalitarianism; or if the health care system is “managed” by government, and a corrupt one at that; or if the illegal immigration crisis remains out of control, sex trafficking increases, American drug use continues to spiral; if human life is continually devalued through the killing of born babies and immoral Hollywood smut; healthcare costs are cut by “natural selection,” i.e. the elderly, chronically ill children, and the mentally handicapped or ill will have an imposed “duty to die”—what kind of country will this be for anybody’s kids?

The outright lies of the leftwing media, the government obstruction that leaves the nation in abject emergency, the grab for power—at any cost. Do they not see the end?

On a personal note, I wrestle with the questions “Are the Democrats, including the subgroups, really this irrational and demented?” Or, “Are they puppets pushing an agenda in exchange for being paid?” “Have they started believing the lies they tell people?”

Looming danger and destruction, amidst reckless and ignorant people, can be quite disturbing. And Democrats are very reckless and very ignorant. They are the Babylonian envoys who will redistribute everybody else’s wealth, take away what people have worked hard to acquire, hand out welfare freely thus deepening a person’s feeling of inadequacy, the list goes on and on. Their destruction knows no bounds.

Socialism, communism, far left liberals, modern liberalism, the Democrat party–these people can’t/won’t/don’t think through the trajectory of their failed ideologies, intolerance, obstruction, corruption. They think only of the means–to the puppeteer’s end–and how they will personally benefit.

This party’s members legitimately think, “At least I will have ‘peace and security” in my lifetime.” And they are not submitting to God’s grace.

It’s true that Hezekiah has nothing in common with far-left liberals and Democrats These people are the antithesis of Hezekiah. What ultra-selfish person would say “oh well, let’s destroy the country; by the time it’s like Venezuela, I’ll have plenty of money, and toilet paper, saved up…”? Or what woefully birdbrained person would fail to ask, “What is the end to these means?” How much vicious hatred does it take to continually stir the pot of descension?

The elitist socialists, fascists, Nazis, Democrats, communists (they’re all the same) don’t care about the end–I get that. Because in the end they remain, or at least think they will remain, in the small sliver of wealthy elitists while all others are poverty-stricken.

But the useful idiots? Aka the “elitist wannabees”? CNN commentators. Newspaper workers (they no longer have journalists). Pundits. African-Americans who’ve bought the lie. The LGBTQ community who’ve acquiesced. Hispanics who think Democrats are their friends. Are they really so destitute of vision? Don’t they know the elitists will push them out quicker than a white man with a MAGA cap?

I’ve heard you can’t fix stupid. In the case of Democrats, you can’t fix corruption. It is within their fundamental core. As Titus says, their minds and consciences are corrupted.

All of the Democrat Socialists, and their sounding horns, well, it is ironic how much irony they represent. Apologizing for America? Disdaining its founding? Harping on past issues as if they still exist? Calling the nation racist?

Do they not know? Do they not know that if America is ever ruined, there will be NO PLACE to go? There will be no nation to help. No place to seek asylum. Well, there is Israel. But the Democrats won’t be going there now, will they?

America is the greatest country to ever exist. Why are the Democrats and their factions so hell-bent on destroying it? When they have raped and pillaged America’s wealth—and it will run out in their hands—then what will they do?

What We Do In The Present Matters In The Future

What we do in the present matters in the future. Hezekiah did what was right in the eyes of the LORD as well as removing the high places. And God watched over his kingdom and answered his prayers—to heal him of a fatal disease, and to protect Jerusalem from the king of Assyria and his army. 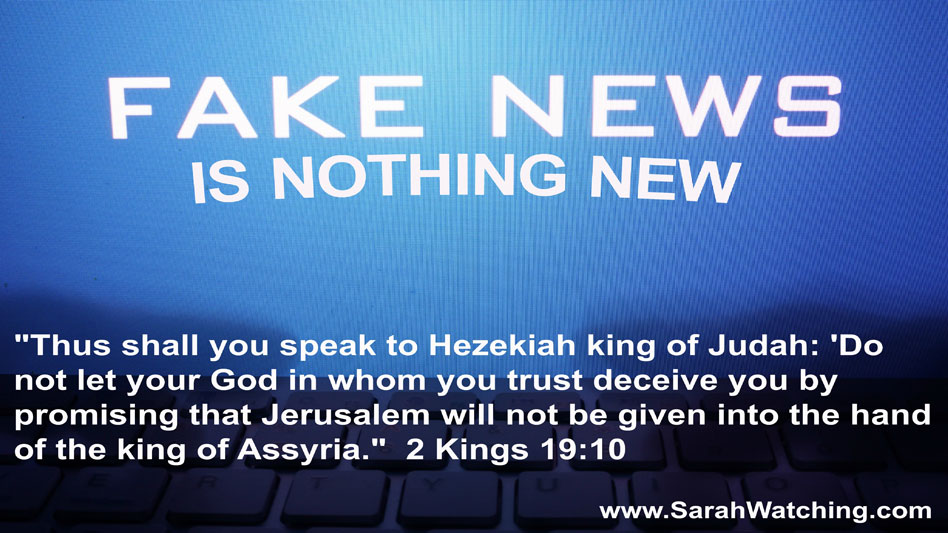 What we do in the present matters in the future. Whatever judgment befalls, Christians can say “the Word of the Lord is good.” But will we be able to say, “at least there will be peace and security in our lifetimes?” Probably not. But we have the hope of a much better peace and security. This is the most important thing to remember.

What we do in the present matters in the future. Let us be ever more persistent in praying for our country. When the Assyrian king threatened Judah, Hezekiah prayed immediately. His prayer is one we can adapt to our own needs. The bolded words have been changed from the original.

American Christians received the threats from the hand of the fake news messengers and read it; and America’s Christians went up to the house of the LORD and spread it before the LORD.  15 And the American Christians prayed before the LORD and said: “O LORD the God of Israel and all nations, who is enthroned above the cherubim, you are the God, you alone, of all the kingdoms of the earth; you have made heaven and earth.  16 Incline your ear, O LORD, and hear; open your eyes, O LORD, and see; and hear the words of the Democrat Party, which they have sent to mock the living God.  17 Truly, O LORD, the ideas of socialism/communism/fascism have laid waste the nations and their lands  18 and have cast their gods into the fire, for they were not gods, but the work of men’s hands, wood and stone. Therefore they were destroyed.  19 So now, O LORD our God, save us, please, from their hand, that all the kingdoms of the earth may know that you, O LORD, are God alone” 2 Kings 19:14-19

The outcome of Hezekiah’s prayer:

“Therefore thus says the LORD concerning the king of Assyria [in our case, the Democrat Party]: He shall not come into this city or shoot an arrow there, or come before it with a shield or cast up a siege mound against it.  33 By the way that he came, by the same he shall return, and he shall not come into this city, declares the LORD.  34 For I will defend this city to save it, for my own sake and for the sake of my servant David.”  35 And that night the angel of the LORD went out and struck down 185,000 in the camp of the Assyrians. And when people arose early in the morning, behold, these were all dead bodies.  36 Then Sennacherib king of Assyria departed and went home and lived at Nineveh.

May God save the United Status from tyrannical leftists until Jesus returns.